As part of the Hyperion EU project, samples of local rock were taken from the Tønsberg pilot-area to be sent to Italy for analysis.
Rhomb porphyry (Rombeporfyr) and a local Monzonite, called Tønsbergite, were used for the construction of the castle on Slottsfjellet as well as churches, monasteries, and other monumental buildings in medieval Tønsberg. These types of stones are local and were extracted from quarries in or near the city.

The whole of Slottsfjellet consists of the rock Rombeporphyryr, and this type of rock was probably mainly mined here in the Middle Ages. Tønsbergitt is found in the edge zone south of the city, including Teie, Rambergåsen, and Vear. In the Middle Ages, it must be assumed that they broke this stone as close to the city as possible and transported it across the city fjord by boat or across the ice.

Under the guidance of Vestfold fylkeskommune’s Geologist, a piece of rhombic porphyry was taken out at the foot of Slottsfjellet and a piece of Tønsbergitt was taken out in an old quarry on Teie. The samples shall be analyzed for chemical and physical properties at the Department of Geosciences at University of Padova.

Slottsfjellet is part of the research project HYPERION which is about how cultural monuments are affected by climate.

You can read about the project here:
https://www.vfk.no/…/kulturarv/kulturarvartikler/hyperion/ 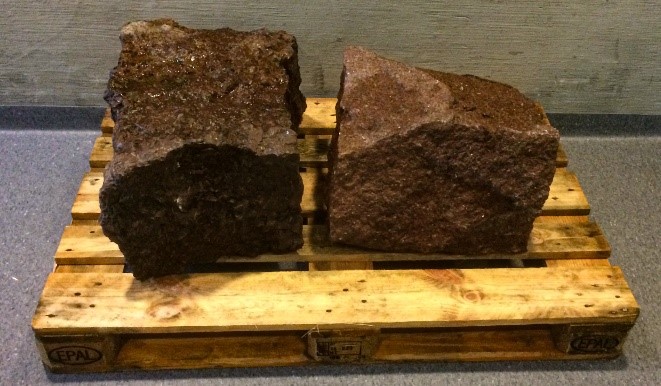